The Pacers won their third and final ABA championship in 1973 when they defeated the Kentucky Colonels in a seven-game series. The visiting team won five of the games, something to remember the next time you hear someone talk about the importance of homecourt advantage in the playoffs. 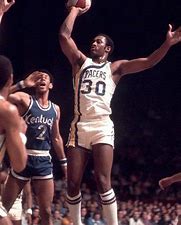 The Pacers had traded Bob Netolicky and Rick Mount over the summer but added Donnie Freeman and came back with a more cohesive group. Roger Brown was starting to slip by this point but George McGinnis took over the starring role. Just 22 years old and in his second professional season, he was voted Most Valuable Player of the series after leading the Game 7 victory in Louisville.

This highlight video, narrated by the Pacers’ radio play-by-play voice Joe McConnell, lasts 26 minutes and is available only to subscribers:

Please Login. Not a Member? Join Us
Tagged with: 1973 ABA championship, George McGinnis