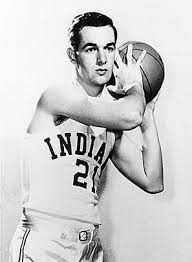 You could run eight hours of shows with Slick, and still leave people wanting more. I settled for two.

He’s got a lot of great stories, and he’s a great story-teller, so it’s hard to go wrong talking with him. He’s got the knack for telling a story he’s told a thousand times as if it’s the first time, which makes him perfect for radio. We sat in his living room one day and relived some of them. I had to ask him questions I had already asked for stories I had already written, but he played along.

Each of these episodes ran a few times, most recently before his induction into the Naismith Hall of Fame in 2014. He’s one of Indiana’s most beloved sports figures, not only for starring on an NCAA championship team at IU and coaching the Pacers to three ABA championships, but for being such a good-hearted wild man. Or is it a wild good-hearted man? Throwing ball racks, kicking balls into the stands, threatening opposing coaches in the newspaper, drinking his players under the table … Slick is one of a kind. And just about the easiest person in the world to befriend.