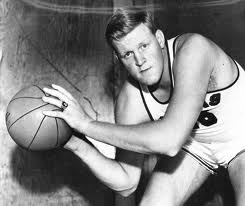 One on One with Mark Montieth
Clyde Lovellette

I had never met Lovellette, but had always been curious about his career. I was fortunate to be able to get together with him at his sister's house near Butler University when he was visiting one winter. I called Slick Leonard before we began so they could talk for a few minutes. They came out of high school in Terre Haute one year apart, played against one another in the NBA and ran the Pacers' open tryout together in the summer of 1967.

Lovellette and Leonard were nearly college teammates. They should have been, and would have been if Indiana coach Branch McCracken had put more effort into recruiting Lovellette. If they had been, IU probably would have won the national championship in 1952 as well as '53. Instead, Lovellette led the nation in scoring and led Kansas to the '52 NCAA tournament championship. He's still the only man to pull off that combined feat.

Lovellette is a member of the Naismith Basketball Hall of Fame, but is unknown to most modern fans in Indiana because he played out of state after leaving high school. His playing career was great, though, and his backstory is just as good. You'll hear about a bizarre recruiting effort, a challenge posed to him in a magazine that changed his life and a supernatural experience that brought him back to Indiana.