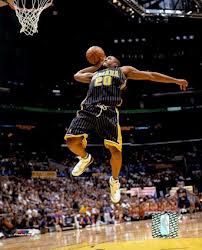 The former Pacer was back living in Indy again, showing up at games with a fledgling business project to promote. He came into the studio to talk about it.

I covered his four seasons with the team, during which he ranged from looking like a savvy draft pick to a near-bust. Donnie Walsh allowed his coach, Isiah Thomas, to make the call on the 14th pick in 2002, and Thomas went with this guard from Oregon who hadn’t been listed in the first round of most mock drafts.

Jones had an uneventful first two seasons, aside from winning the NBA’s slam dunk title in 2004, but got his break in the 2004-05 season when the suspensions resulting from the brawl in Auburn Hills forced him into the starting lineup. He took advantage, scoring a career-high 31 points in the first game after the, uh, incident, and averaged a career-best 10.6 points for the season.

He was expecting to improve on that the following season, but wasn’t given an extension to his rookie contract in October. That, and the arrival of Sarunas Jasikevicius, who took some of his playing time, damaged his pride and messed with his mindset. His scoring averaged dipped to 9.6 and his shooting percentages dropped all the way around. He signed a free agent contract with Toronto after that season, was later traded to Portland, was then traded to New York and finished his career with the Clippers.

He was forced into retirement at the age of 29, which seemed unnecessary given his talent and athleticism. He could have handled his final season with the Pacers better, but he still qualifies as one of the good guys and should do fine in the real world.