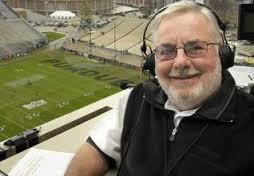 Joe has done more in broadcasting than most, calling games for a long list of professional and college teams.

He started humbly at Franklin College, then moved to Lafayette. He even worked as Purdue’s assistant sports information director for a couple of years, but kept working his way to the top of the broadcasting ladder He’s worked games for the ABA Pacers (calling their 1973 championship) and a variety of NFL, NBA and MLB teams. He finished his career calling Purdue football games before retiring in 2009.

I talked with Joe over the telephone, and then went to his home on Indy’s south side to take reel-to-reel tapes he had on the Pacers’ Game 7 championship victory and of the “Lasers” football broadcast. He had created a fake Indianapolis NFL expansion team in the Seventies and went to a lot of trouble to put together a realistic broadcast. Wouldn’t happen today, for several reasons.

Guys like Joe have a lot of stories, and set an example for aspiring broadcasters because of the humble path they have traveled.

Joe also unwittingly provided a motto for my show. He said a friend of his had been leery of listening to an hour-long conversation with one person, but wound up being impressed with how quickly the time passed. From that point on, the show became “the fastest hour in radio.”