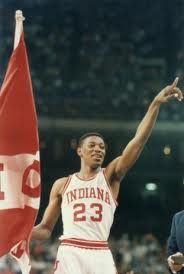 One on One with Mark Montieth
Keith Smart Part 1

He hit one of the most famous shots in the history of college basketball, and he's told the story thousands of times by now. For that matter, he's talked to me about it a few times. But he can tell it like it's the first time. That's good, because it's such an important part of college basketball history.

His story goes beyond one game-winning jumper for the championship in the NCAA tournament, though. He had to fight from the bottom up, a non-recruited high school player who went to junior college, blossomed and caught on at IU. He played two games in the NBA, too, enough to have one great story, and then settled on coaching. He worked his way up from the minor leagues to the NBA, and has been a head coach in Cleveland, Golden State and Sacramento.

He's got a lot of stories to tell, enough to tell two episodes, and he tells them well, even on a late-night phone call such as this one. Be sure to catch his answer to the “dream question.”