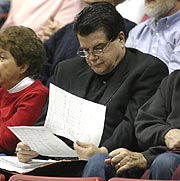 This guy can talk, which is a good thing for people like me, because he has stories to tell. A lot of stories. Not to mention a lot of insight.

I first became familiar with him when his fearless, wide-open Cleveland State team beat a halfcourt, paint-by-numbers IU squad in the NCAA tournament in 1986. It was Knight’s first-ever loss in the first round of the tournament. Mackey’s oncourt interview after that game was classic, a blunt appraisal that basketball was a black player’s game and you had to play a fullcourt game. He had been a great high school coach in Boston, and a successful recruiter as an assistant at Boston College, because he wasn’t afraid to go into the inner city for talent, and that’s how he coached.

It’s too bad it didn’t work out for Mackey at Cleveland State. Had he stayed there longer, they probably would have named an arena after him. Could have called it Mackey Arena. Oh, wait … Anyway, he torpedoed his career by indulging in virtually every vice known to man – alcohol, drugs, prostitutes, seemingly anything he could get his hands on. And with his new contract at Cleveland State, the result largely of his win over IU, he could get his hands on just about anything he wanted.

Mackey was fired, as tends to happen under these circumstances, and wound up in John Lucas’ drug rehab facility in Houston. I found out later he roomed with Jay Edwards, who was there for the same purpose: getting clean. Edwards told me they didn’t get along well, both being alpha-male types accustomed to getting their way. But they did get clean.

Mackey bounced around basketball’s minor leagues until one day he got a call from newly-minted Pacers president Larry Bird. He thought it was a prank call at first, and hung up. That probably happens quite a bit to Bird when he calls people he hasn’t met. In fact, Bird called me back before he was officially hired to coach the Pacers and I nearly hung up on him before I realized it really was him.

Bird hired Mackey as a scout for the Pacers, and by all accounts he’s been a good one. He knows so many people in college basketball, and is comfortable in so many surroundings, he can dig out a lot of information. He’s also a good guy, as guys who have gotten in trouble the way he did and come out the other end often are.

There was no way to contain this to one episode. I could have done three if I wanted, but I settled for two.