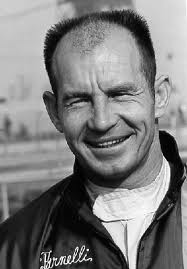 I had never met Parnelli Jones, and we had to conduct this conversation by telephone while he was at home in California, but he made it easy for me. He’s a genuine throwback to an earlier era of racing – two or three eras ago, actually.

He’s the 1963 Indy 500 champion and the oldest living winner of the race, but doesn’t get mentioned with the Andrettis and Foyts because he got out while still in his thirties, with life and limbs intact. He was as talented as anyone, though, with six victories in Indy Car, four in NASCAR, 25 in midgets and 25 in sprint cars. He’s a member of 20 Halls of Fame, although I can’t imagine why there would be so many racing-related halls of fame.

You should listen to this episode, if nothing else to hear the story of why he punched Jim Hurtubise in the nose the day after winning the 500.