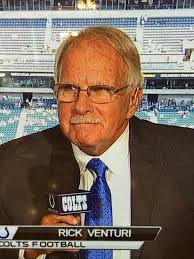 He coached practically forever, in college and the NFL, with varying degrees of success. His rare head coaching opportunities came at places and times when Lombardi couldn’t have won, so it’s difficult to judge him in that regard. He lasted a long time as an assistant, though, so he must have been doing something right.

More recently, Venturi has established a local niche as an analyst on radio talk shows. He knows of what he speaks, and says it so the average fan can understand. The real reason for going to his home in Noblesville to record this episode, though, was to talk about his coaching experiences. He was recruited by Purdue, played at Northwestern, was an assistant at Purdue, and then the head coach at Northwestern, where his teams went 1-31-1. It was a painful experience for him, but fascinating to hear about now.

Fortunately the NFL didn’t hold that against him and gave him the opportunity to coach defense for a long time. He had a couple of shots at being an interim head coach, too, under circumstances similar to those at Northwestern, so his record there is 2-17. People like to say “You are what your record says you are,” but I doubt that’s true in Venturi’s case.

Regardless, he’s got a good story to tell about the life of a coach and a man steeped in football.