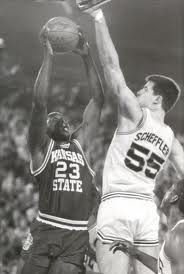 I met Scheffler in 1987, when I began work on my book, Passion Play. He was a sophomore on the Purdue team that won the Big Ten by two games and reached the third round of the NCAA tournament, and was easily one of the most interesting characters on the team.

You couldn’t meet a more naïve, honest and sincere person, and fortunately he hasn’t changed much. He was teased a lot that season, but went on to be named the Big Ten’s MVP as a senior by the sportswriters and played parts of seven NBA seasons for Charlotte, Sacramento, Denver and, most of all, Seattle, where he became a fan favorite.

I had to do two episodes with Scheffler, because he’s a unique guy with a lot to say. From the impact dyslexia had on his childhood and self-image to his struggles at Purdue to his thoughts on the NBA, you’ll enjoy the conversation. This is a guy, keep in mind, who was so polite he said thank you to the referee every time he was handed the ball to shoot a free throw. He was a bit of an outcast in college for being such a straight arrow, but has it all going for him now. He’s doing well as a businessman back in Michigan, and is happily married with children. But that doesn’t mean he still isn’t teased by his old teammates when they get together.

He’s had the last laugh.