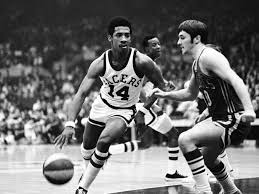 [H]ere are career summaries of four former professional basketball players. Find the one that doesn’t fit.

Does anything jump out at you? Does anyone not belong?

No, and that’s exactly the point. These four player profiles mesh, just as their performances meshed during the seasons they played together for the Pacers. One of them, however, stands apart for a glaring omission that could quickly, although belatedly, be corrected in one evening with one ceremonial swoop.