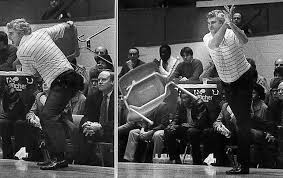 I was asked to write this profile of Bob Knight in February of 1985 when controversies were mounting, as they tended to do in Bloomington during Bob Knight’s coaching tenure there. Knight had coached the U.S. Olympic team to a gold medal the previous summer, but the season wasn’t going well for his team and Knight was back in the news.

This story was a challenge because I had to work on it between my responsibilities as a beat writer for both IU and Purdue. I also couldn’t talk with Knight, who wasn’t about to sit down for this kind of story during the season, particularly when things weren’t going well.

At this point, no books had been written on Knight and surprisingly few newspapers had attempted profiles. The first major piece was written by Bruce Newman of the Indiana Daily Student in 1975. It was excellent and was the primary reason Newman got a job with Sports Illustrated right out of college.

I did the best I could with the resources I had. I was told later by Indiana’s sports information director, Kit Klingelhoffer, that Knight liked it. (Regardless of what he said, he was aware of virtually everything written about him.) I always had mixed feelings when given that kind of compliment. Had I been too soft on him? The problem was, when writing about Knight, you were never likely to find someone willing to go on the record and be critical of him. I couldn’t blame them. Why put yourself through the harsh reaction from IU fans? That’s why I turned to a couple of newspaper reporters for commentary. Although friends, they could be more objective about Knight.

A week after this three-part series ran, Knight threw his chair across the court in the rematch with Purdue, igniting controversies to a peak level. So much for him mellowing, as my profile indicated.

(c) 1985, The Journal-Gazette, Fort Wayne, IN. Reprinted by permission.

It was a Friday afternoon at West Point Military Academy, 1964, when a 24-year-old private was called in to receive the opportunity of a lifetime.

Tates Locke, the academy’s head basketball coach, was leaving to take over the program at the University of Miami in Florida, and the army brass, after sqjne hesitation, had decided to offer Locke’s former job to his young assistant, who had never been a head coach.

But they didn’t get the eager and grateful response they expected.

Knight’s hesitation was no ploy. Although he had voiced interest in the position, his two-year hitch in the service was near its end and he was considering enrolling in law school at UCLA.

But in delaying his response, he reaffirmed an independence that has been the hallmark of both his coaching career and his life.

“After that,” Knight would say later, “I was always in a position to do things on my own terms or not at all. That’s the only way I can work.”

Nearly 21 years later, Bob Knight is still doing things on his own terms at Indiana. Whether that means skipping Big Ten Conference meetings in protest of alleged cheating in the conference, playing an all-freshmen lineup plus senior Uwe Blab in a loss to Illinois or kicking Mike Giomi off the team for missing a few classes after being put on probation for flunking a class, his dogged insistence on doing things his way continues to inspire both admiration and dissent, leaving controversy in its wake.

Trying to sum up his character raises almost as many questions as it answers. Pick an adjective, almost any adjective, and it applies in some degree to Bob Knight. Arrogant, brash and combative, yet determined, energetic and faithful. Grandiose, haughty and intimidating, yet just, kind and literate.