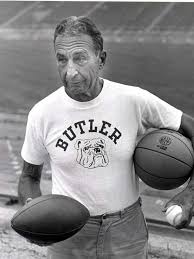 That’s as good a place as any to begin when examining what’s nothing less than the most unusual career in the history of American college athletics, a livelihood that spanned three sports and 49 years, and landed him in at least seven halls of fame.

And, yes, who else would also officiate high school football games on Friday nights, just to help fill the hours?

“Isn’t that crazy?” said 1968 Mr. Basketball Billy Shepherd, one of his most prized recruits. “He did it for years.”

So many aspects of Hinkle’s life and coaching career qualify as crazy by today’s standards, but he wasn’t. While those unfamiliar with his personality might picture him as some manic workaholic who couldn’t sleep, sit down or settle into anything, he actually was a calm, collected sort who rarely raised his voice. He accomplished so much for so long by keeping things simple and not taking things too seriously.

Hinkle took the same approach to his role as athletic director. He was said to be a “three-drawer man,” who kept the budget in one drawer, schedules in another drawer and contracts in another.