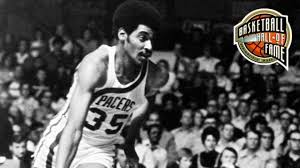 Roger Brown and I were neighbors for a few years when he played for the Pacers. We lived just one block apart geographically, but a world apart in other ways. I wrote this article shortly before he was inducted into the Naismith Hall of Fame in 2013.

Roger Brown lived a block away from me during some of his peak years with the Pacers, which for a minute or two lent a hint of renown to our ordinary middle-class neighborhood.

He resided on Coil St. off of Michigan Rd. I grew up one block to the north on 65th St. It’s a fact, not a brag, that the house I lived in was bigger and better than his, which tells you something about the salaries for most ABA players of the day. He made up for it by having better cars than my dad did. Every once in a great while he’d drive by in one of his Cadillac Eldorados – I remember a canary yellow one and a hot pink one – which was about as big a celebrity sighting as one could experience back in those days in Indianapolis.

Please Login. Not a Member? Join Us
Tagged with: Naismith Basketball Hall of Fame, Roger Brown