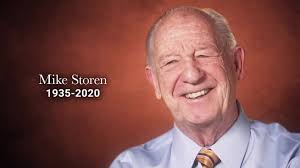 Mike Storen passed away on May 7, 2020. It came as somewhat of a surprise to me as I had not heard he was ill and had talked with him perhaps six months earlier. But then he had not responded to an email I sent to him a month earlier, so that was my clue something was wrong.

I talked with Storen many times during the research phase of my book on the formation of the Pacers franchise, “Reborn” and always found him to be an energetic and helpful force. My only in-person conversation with him came when he attended the Sixties Night celebration during the Pacers’ 50th anniversary season. He invited me to meet him at the Embassy Suites hotel where he and his wife were being put up, and we talked for a couple of hours that morning. I never failed to learn something when I talked with him.

The early survival and ultimate success of the Pacers in their formative ABA seasons owes to several fluky factors.

Getting Roger Brown out of a factory in Dayton was one. Getting Mel Daniels in a trade for a mere $100,000 because the Minnesota Muskies were moving to Miami and needed a quick infusion of cash was another. Getting Bob “Slick” Leonard to coach the team early in the second season because he happened to be living just up the road in Kokomo while selling high school graduation supplies was yet another.

Landing Mike Storen as the franchise’s first general manager might have been the greatest break of all, however.

Storen, more than anyone, laid the groundwork for the Pacers by establishing an aggressive, confident and optimistic culture that factored into every positive development over their first three seasons. The Pacers quite possibly would have signed Brown without Storen’s involvement because Oscar Robertson had already recommended him, but they likely wouldn’t have traded for Daniels or signed Leonard without Storen.

It so happens Storen’s arrival was every bit as fateful as the others.