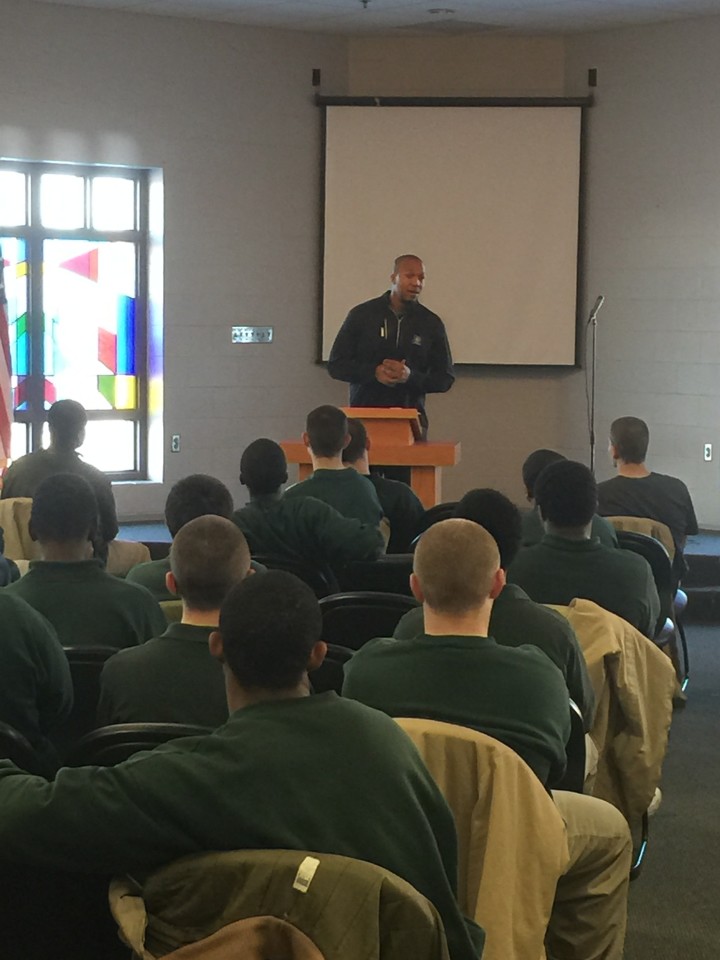 I accompanied West to the Pendleton Reformatory toward the end of the 2014-15 season to listen to him speak with the juvenile inmates. I followed him halfway there, then rode with him the rest of the way to research the backstory. I had been told I wouldn’t be able to record or photograph his appearance, but got quick approval when I asked the woman in charge.

This sort of thing is what separates West from most NBA players, not to mention most of society. It’s non-glamorous, grassroots stuff, going directly to the source of a problem. He had never heard himself speak publicly before, so I burned a CD of his speech and gave it to him.

Three of the kids wanted no part of it. Given the option of listening to the man who had come to speak to them or going to the rec center to play basketball, they had no doubt which would be more fun.

Carl Nicks wasn’t having it, though. He met them in the back of the room and began pleading. “Do you guys realize what you’re doing?!” he asked. “This is a once-in-a-lifetime opportunity! You can play basketball any day! Come on, use your mind! Stay here and listen to this!”

The kids hemmed, then hawed and finally decided to stay and listen to David West. The Pacers’ forward had driven to the Pendleton Juvenile Correctional Facility following the team’s practice last week for the very purpose of getting a message through to kids like them – kids who would rather play ball than listen to authority figures.

West knows about kids like that, because he’s done this just about every year of his NBA career. The NBA requires players to participate in community service events throughout the season, but that includes a wide spectrum of possibilities. Some visit sick kids in hospitals, some help serve Thanksgiving dinners, some drop by schools. West prefers this sort of thing, talking to “young guys who have been written off” by most of society.

“Nobody takes the time to encourage them and meet them where they are,” he says.

West does. Rather than viewing them as “bad kids” who need to be locked away from the rest of society, he sees them as young men who have grown up in difficult circumstances, haven’t been taught how to deal with challenges and perhaps have made just one bad mistake. He has friends and relatives, and even a college teammate, who have spent time in prison, so he knows how perilous the journey can be for some. But he also can recall a few friends who were headed down a bad road and were saved because someone stepped in to make a difference.